If the CEO of OpenAI thinks that you are a stochastic parrot, then that means that he doesn’t really recognize you as a person. We have a word for that kind of systemic lack of empathy and that word is “psychopath”.

Spent way too much time trying to get my ESP32 board to send data to my mqtt broker. Still haven’t got it working. Probably should have just stuck with REST. Too clever for my own good.

Use AWS_PROFILE when working with AWS SDKs of all kinds

It turns out that if you set an environment variable named AWS_PROFILE, all AWS SDKs (including the CLI) will respect that value when looking for credentials for the current command.

Thanks to my brother, Ben, for pointing this out to me. It cleaned up a ton of boilerplate in some Ruby code I’ve been writing.

Currently reading: Stories of Your Life and Others by Ted Chiang 📚

Well written but too hopelessly dark for my taste.

ChatGPT and its ilk may well result in a better experience for searching than Google — for a while. But if you don’t think the shitty incentives that led to Google’s quality dropping off aren’t going to affect these LLMs in the exact same ways, I’ve got a bridge to sell you.

Docker is just terrible. The default options always seem wrong. The error output is often inscrutible. Debugging is a nightmare. This is just poorly designed software.

This is it. The last 25 years in a nutshell.

There is no way that the people who work on docker actually ever use docker.

Finished Andor. What a show.

For months I haven’t been able to login to “My UPS” (which is now the only way to get detailed tracking info). Attempting to login would give me error LASSO_1010. Attempting to reset my password would return an “Application error” and never send a reset email.

The solution (via this Reddit thread) was to install the UPS mobile app, and initiate a password reset from the app. In that case I did receive the reset email, and was able to update my password, and I can now login.

Replaced a thumb stick in a VR controller tonight. Required a full tear down, but cost $15 instead of $75 for a new controller, and I’m not sending a good controller to the landfill because one part was bad.

Was fiddly and took a while, but very gratifying.

… the impulse to repair arises from and is sustained by love — and that the particular form of love at work here is friendship. By repairing the things of this world we exhibit friendship towards them — and they become friends to us in return.

Alan Jacobs, the friendliness of objects

If you buy something off the shelf, like an iPhone, which you can’t change, you’re less likely to care for it, and it’s going to end up in a drawer. Back then you could go to Radio Shack and get parts for your computer, it was possible to customize it (for example, the Altair), and then you could know it in its entirety. Devices that were customized, or built from near-scratch, are still loved, but as for your old iPhone6, you don’t know where it is, and even if you did it’s probably unusable. Devices like the iPhone6 can’t be repaired, they are designed to fail in ways that are inscrutable.

These sound like different notes in the same chord to me. I want computers, and computing, to be personal again.

I’ve working on adding some physical controls to my kitchen status display. The setup is very simple, and for a first-run all I wanted to be able to do was detect a button press, and run a script somewhere on the system.

I couldn’t find any existing code that does this (please point some out if you know of any), though there’s plenty of code out there for button handling in general.

Also, most of the code out there for doing GPIO work is either in C or Python, and I was hoping for a Ruby solution, or at least a solution that would be easy to wrap in Ruby.

In the end I learned about how to interface with the GPIO system on RPi via the filesystem.

From there, I found this code from Aaron Patterson using epoll to monitor for changes in the level on the monitored pin. That seemed like it would work, but the epoll gem seems to be unmaintained at this point. Instead, I went with the Sleepy Penguin gem, which provides an interface to the same underlying Linux filesystem events.

Lastly, I wanted my pin pulled high by default, and there’s no way to do that via Sysfs, so I ended up using the gpio utility to set the pin state and pull up resistor.

From there, I was able to run this little script, which will output the current state of the pin when it changes.

Still to come: debouncing, better handling of a change event, and hopefully wrapping it all up into something much easier to work with.

For a long while now I’ve had a weather/calendar/status display on the wall in my kitchen. Powered by a Raspberry Pi, it updates every few minutes. Recently I started thinking about extending the interface, adding a few buttons to choose which “page” might be active at any given time.

My hope was that I would be able to do a quick update to the display while the button “selection” UI was being interacted with. The term for this in the eInk/ePaper world is “partial update.”

After spending a lot of time researching and experimenting, I haven’t yet been successful, though I learned a lot in the process. At this point I need to pause my project, but I thought it might be worthwhile to jot down my notes thus far, in case they might be helpful to anyone else trying to do the same sort of thing.

Most of the displays that Waveshare sells seem to be manufactured by Good Displays, then Waveshare builds some boards and code, and sells/distributes.

Waveshare provides demo code and documentation for this display (and their other displays) on wiki on their website.

My status display uses some Ruby libraries to generate a BMP image, which is then transferred as-is to the display every few minutes.

How These Displays Work

This video by Applied Sciences on YouTube is a great place to start in understanding how these displays work, and how they can be manipulated.

The fundamental principle to understand is that the display uses pulses of AC power to create a charge differential that pulls the white/black capsules to different sides of the silos they float in. The pulses are necessary because applying a constant DC voltage would induce a charge in the structure of the display itself, and further refreshes would not be possible anymore. So these waveforms must be effective both in moving the ink capsules, as well as avoiding unnecessary charge inducement. To some extend these waveforms are a “secret sauce” of good display drivers (and, from what I can tell at least, a good part of the reason that Kindle displays seem so far ahead of the rest of the eInk world — they’re using complicated, probably very high frequency updates, maybe driven by hardware of a higher complexity than these other hobbyist boards; I’d love to know more).

Most of these displays can be manipulated in such a way that you can update only a subsection of the display, at a higher rate than is possible when refreshing all the pixels at once. (See Waveshare sample code for some examples on some of their smaller displays).

When a screen refresh is performed, the display executes a series of AC pulses based on stored waveform data. The waveforms vary depending on the pixel transition. White -> White, White -> Black, Black -> White, etc. can all have different waveforms in use.

The Waveshare boards support overriding the waveforms with custom LookUp Tables (LUTs). The format is complicated, but you can find documentation in their spec docs; the Applied Sciences video is another good reference for these.

ZinggJM has some custom code supporting many, many panels; many of these have custom LUTs for doing fast/partial updates. It’s worth digging into those for examples of how LUTs work; or, if you’re satisfied, just use his code to drive your display(s).

This huge thread in the Arduino forums has a ton of little gems and tidbits about using these displays.

This is another fast-update project with code that might be helpful.

This is the code that Ben Krasnow (Applied Sciences) shared in his video. 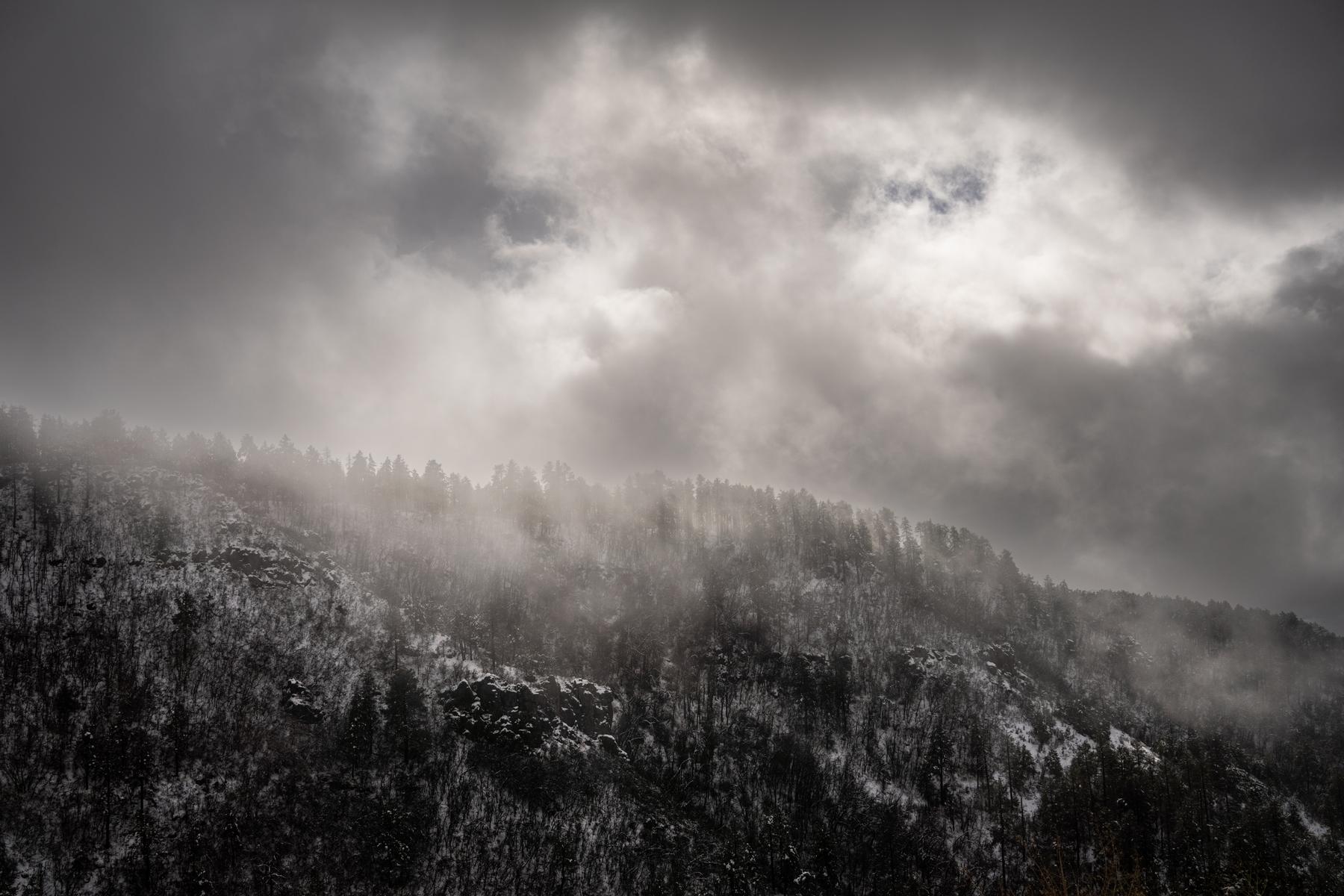 Backlit clouds are illuminated by the afternoon sun, as misty clouds obscure the top of a snowy, tree-covered canyonside.

Currently reading: Breaking Bread with the Dead by Alan Jacobs 📚

These are my notes to myself for adjusting the Z Offset for the BLTouch for my Ender 3V2 Printer.

Speaking of eBooks, if you aren’t familiar with Standard Ebooks, check it out! Free, high quality eBooks (in all formats) of classic out-of-copyright texts. Not a bad place for an end of year donation, either.

I feel so torn about eBooks sometimes. I absolutely love my Kindle — it’s one of my favorite things. I love how small and portable it is, and I love having so many books always available, and I love how easy it is to find and get new books.

On the other hand I love physical books, especially used books. And I love being able to look at a real bookshelf and consider what I might want to read.

I want more analog experiences in my life, but alas, I just can’t get away from my Kindle. Though, the Kindle might be the most analog-esque digital device I own. Interesting.

Finally got my old bookshelf speakers out of a box in the garage and set them up in my bedroom. I should have done this a long time ago!